There would be no RFE without the judges. They give their time and expertise to help those of us who choose to exhibit feel good about our accomplishments and understand what it takes to improve. These volunteers are rewarded by seeing wagging tails, smiling faces and the bond that grows when we perform with our dogs.

But because judges work behind the scenes, you may not know the people whose initials are on your scoresheets. So, periodically I’ll be introducing one of them here in the newsletter.

“I think it’s important to remember that every team you watch is trying their best and deserves positive feedback and encouragement. We all start somewhere!

Jamie Ohman judges Rally-FrEe and competes with her five-and-a-half year old Windsprite, Kyu. “He’s starting to get a handle on freestyle and Rally-FrEe after struggling with IBD for most of his life,” Jamie says. Kyu also competes in Conformation, Rally, and Straight Racing. Jamie says she also hopes to be able to get him back into agility.

Jamie also has a one-year-old border collie/whippet cross. “Kyber is my up-and-coming youngster,” she says proudly, “I see a lot of fun stuff in his future, including freestyle!” 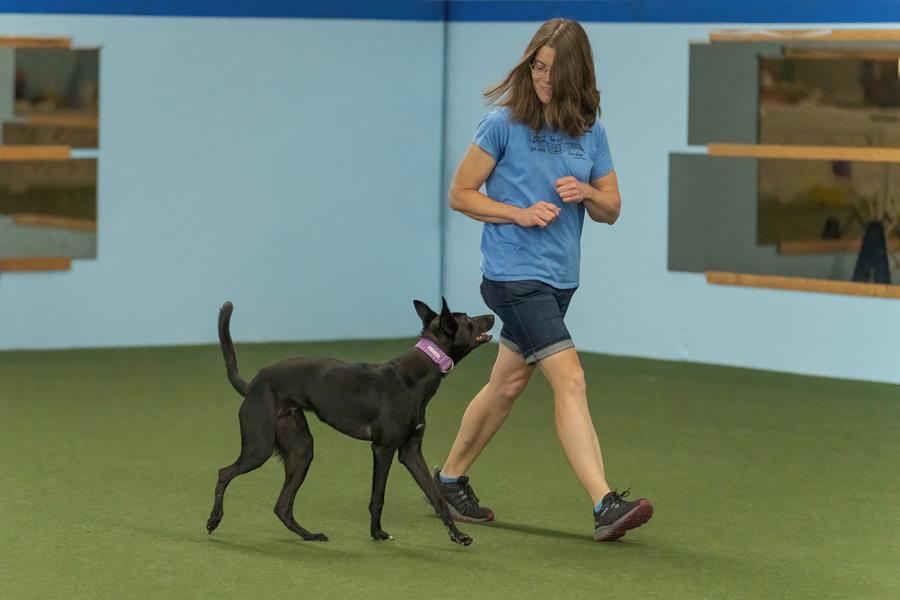 But it was Jamie’s dog, Risa, a shelter rescue with pretty significant fear issues, who got her into freestyle. “Risa was my first dog,” Jamie remembers fondly, “I learned A LOT about dog training just trying to help her feel confident in the world.”

Jamie had high hopes of competing in agility with Risa. “I’d wanted to get into dog sports with her, but our trainer wasn’t offering agility at the time,” Jamie recalls. They ended up signing up for a freestyle class because Jamie wanted to do more than just pet obedience.

“Initially, I had absolutely no interest in pursuing it (freestyle),” she confides. “I actually thought it was stupid!” But, low and behold, Risa, who excelled at learning tricks and performance, turned out to be a natural at the sport. “She convinced me it was something we needed to continue doing,” Jamie chuckles, “and I’m so glad she did!” After competing in a few different sports, freestyle was the thing Jamie and Risa enjoyed most of all!

Mid-way through Risa’s freestyle career, Jamie found out that a new venue for the sport was being started. “I started competing in RFE as soon as there were competitions nearby,” Jamie says.

Eventually, she became interested in judging because she wanted to be more involved in RFE. “As an organization, it’s so supportive of its community!” she says. “I’d judged some AKC Rally and really enjoyed it, so, since I had experience with freestyle and, to a lesser extent, Rally-FrEe, I decided to give judging a go!”

She approaches her duties with a keen eye and a positive attitude. “I like to see precision and clean handling,” she says. “I’m really blown away when I see dogs maintaining beautiful positions alongside their handlers and giving snappy responses to verbal cues.” Jamie says she really enjoys some of the super creative Free Choice behaviors exhibitors come up with and she loves seeing teams from across the globe participating in this sport. “I’ve been wowed and inspired by so many of the teams I’ve had the privilege of judging,” she notes enthusiastically.

Jamie lives in New York. When she’s not working or judging, she enjoys hiking with her dogs, photography, reading, and drawing.