If you’re an RFE member, you’ve no doubt interacted with Judith. She not only judges and competes in both Musical Freestyle and Rally-FrEe, she’s also the admin for the Rally-FrEe for All, and both the Rally-FrEe and Freestyle Spotlight Groups on Facebook. Judith is knowledgeable, friendly, and she’s one of a core group who’s been with the organization from the start. Judith’s creativity and dedication to pitching in with whatever’s needed have helped us grow and evolve into the awesome organization we are today.

While you may know about her love for Musical Freestyle, there are many other cool things about her. So, this month, it’s my pleasure to introduce Judge Judith Stoodley.

“. . . what I most love to see, even more than a flashy performance (although I love those), is the relationship and teamwork between dog and handler!” 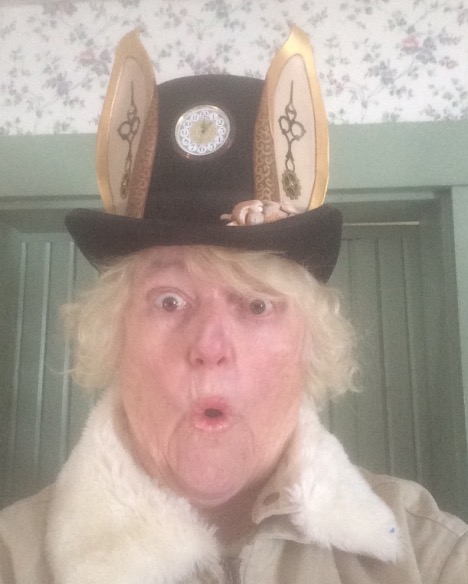 Twenty years ago there weren’t a lot of places to learn about musical freestyle, but Judith discovered the sport someplace that dogs aren’t even allowed- in a library!

“I was working as the night reference librarian in a local college library. The library had recently acquired computers, which I was invited to explore when my assigned work was done. Having trained and competed in obedience and tracking before my daughters were born, I decided to see what I could learn about the current state of the dog obedience world. It was then that I discovered, in quick succession, clicker training and freestyle, which blew me away,” Judith recalled and from that moment she knew she had to try it.

With a bit more research and some dabbling with her own dogs, she entered a competition under another organization, and the hook was set. Soon after, she attended a three-day freestyle weekend where she met Julie and Diane Balkavich, who were both presenting workshops. “Theirs were the presentations that have stuck with me, over twenty years later,” Judith says.

After that things fell into place. “Diane contacted me to ask if I might be interested in coming to her place in PA to learn about a new sport that Julie had concocted called Rally-FrEe and I jumped at the chance,” she chuckles.

When she got back home to Maine, she shared that information informally with a group of trainers who wanted to give Rally-FrEe a try. Their getting together to video runs for competition eventually led to the creation of the Dancing Paws of Maine group that Judith is still actively involved in today. 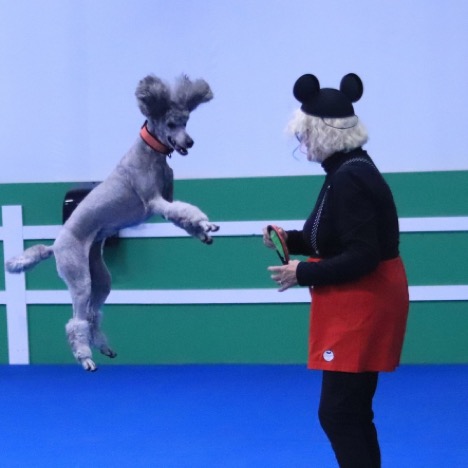 Fully smitten, the next logical step was to become a judge. “I wanted to be a part of RFE and give back in some way, and I also figured that there was no better way to learn everything about the sport than from the inside out,” Judith says fondly.

Judith judges both Rally-FrEe and freestyle now. She enjoys getting to see many performances and runs at all levels. “But what I most love to see, even more than a flashy performance (although I love those), is the relationship and teamwork between dog and handler. Is the dog happy to be in the game? Is the handler supporting the dog in the moment?”

Judith punctuates this sentiment with a story of a memorable RF run that she judged early on: “The dog was an elderly collie, a little tottery on its legs and given to the occasional senior lapse, but happy to be doing something with its owner and vice versa. Getting up and down was apparently hard for the dog, and there was a Down/Stand on the course. Handler cued, dog started to down and hesitated, and the handler praised it and moved on. Same at the Bow. They didn’t earn a super-high score, but they qualified, and if I could have given them more than a ten for teamwork I would have! It still makes me a little teary to think about….”

This compassion, along with fairness, good observation skills, focus, a willingness to visit and revisit the rules and, as she says, “a pinch of generosity” are what makes Judith an in-demand judge for both video and live events. But these are also the skills that make her a talented trainer. Her love of training shines through with her current partners, but it started with a basenji named Sashalia Fiery Spokesman.

“When I was fifteen and it looked like the family would not be moving anytime soon, I was finally allowed to get a dog of my own. Spokie was a basenji, and his breeder made me agree to take him to obedience classes. I was fortunate enough to land in the lap of a Standard Poodle breeder (ironic, eh?) who was a protégé of Blanche Saunders, and even though the choke chains we used back then did nothing to convince my independent little hound who otherwise had free run of our suburban neighborhood that he should do what I told him to do when the leash was off, I was hooked on training!”

That addiction has blossomed over the years, leading to the coveted Grand Champion Trifecta for Judith and her former partner Luna. The Trifecta is awarded to teams who earn Grand Champion titles in Rally-FrEe, Musical freestyle and InSync. To date only 5 others have achieved the distinction.

“In a land long ago and far away I had many animals which had some measure of training, if only for handling and husbandry,” muses Judith. Currently it’s Wiggin, Dreidel, Penny and Pearl who get to play. Penny is a silver Standard Poodle who is competing in both RF and MF. Judith says she’s always loved the look of the silvers, and flew all the way to Minnesota to pick Penny up, earning her the farthest traveled for puppy award. Judith says Penny loves to train and although always a willing partner, she keeps Judith mindful of her cues because Penny is very literal. Penny has also been known to retire to the couch if Judith puts too much pressure on her!

French Bulldog Wiggin earned his RF Grand Championship several years ago. He also holds titles in MF from two organizations and in CPE agility and barn hunt. At nearly 13 he has earned his retirement and enjoys hanging out by the woodstove and earning treats for trying, whether he succeeds or not. 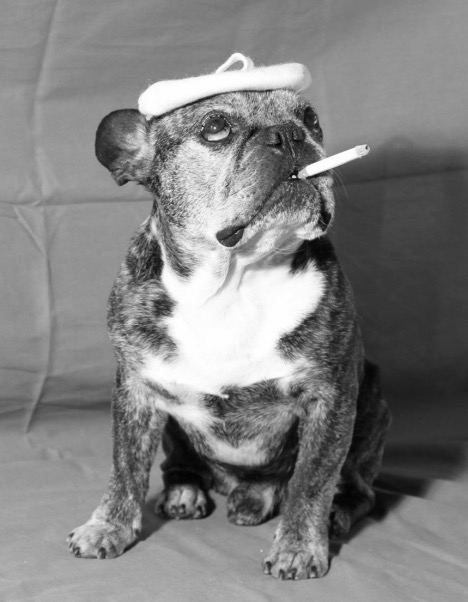 Dreidel is Wiggin’s half sister. “She’s smart as a whip and cute as a button, but we don’t compete due to medical issues,” Judith says. “She did pass her Novice Skills Test and is a much loved mascot.” 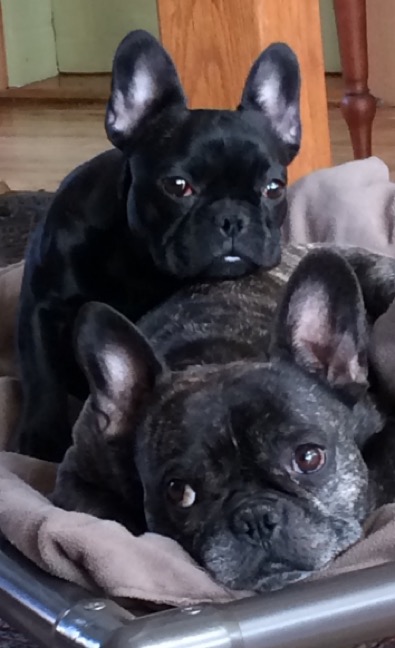 Pearl is the new kid in town. Judith says she’s “smart, curious and playful as a puppy should be!” 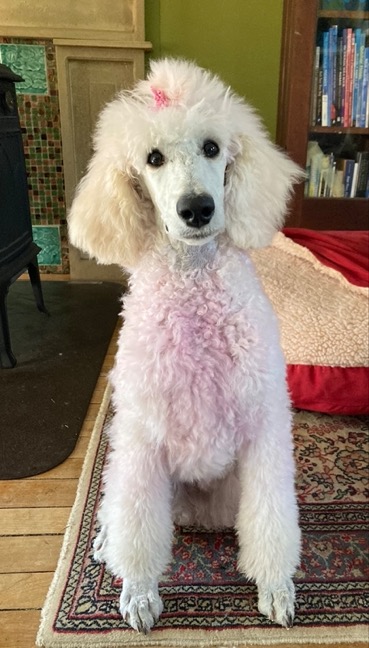 When she’s not judging or training, Judith indulges her love of the land and the natural world. She enjoys landscaping and gardening, both flowers and vegetables. “Winters usually find me indoors, tending the stoves and reading, sewing or doing crafts,” she says. Her most recent hobbies are machine embroidery and needle felting. “I also do some volunteer work for RFE and occasionally throw a weird idea for a contest or activity Julie’s way,” she adds modestly. “Mostly I try to avoid doing housework.”