Three years ago, I created the annual Special Awards to honor three friends and mentors who influenced my freestyle journey, kept me moving forward when things didn’t go as planned, and taught me the intricacies of training this sport that I love. After losing my dear friend and mentor, Diane Balkavich in 2018, I wanted to commemorate her and to show appreciation of everything she gave to me, to our sport and to so many others. And, because tomorrow is never a given, I wanted to create an opportunity to let two others I admire, Cassandra Hartman and Michele Pouliot, know what they mean to me while they are alive and well.

This tradition has now become a way for RFE members to show their appreciation for those that have helped, influenced or had a positive effect on their freestyle or Rally-FrEe training. Read on to learn more about this year’s winners and the wonderful women the Special Awards are named after.

Recognizing those who inspire, encourage, coach and cheer us on in our Rally-FrEe and Musical Freestyle journeys

This year’s Special Awards have a common theme. They are all in the shape of flames to represent the passion, innovation and perseverance each recipient brings to RFE and the sports of Rally-FrEe and Musical Freestyle. The burning flames also reference the courage, inspiration and light the icons these Awards are named for bring to the lives of so many. 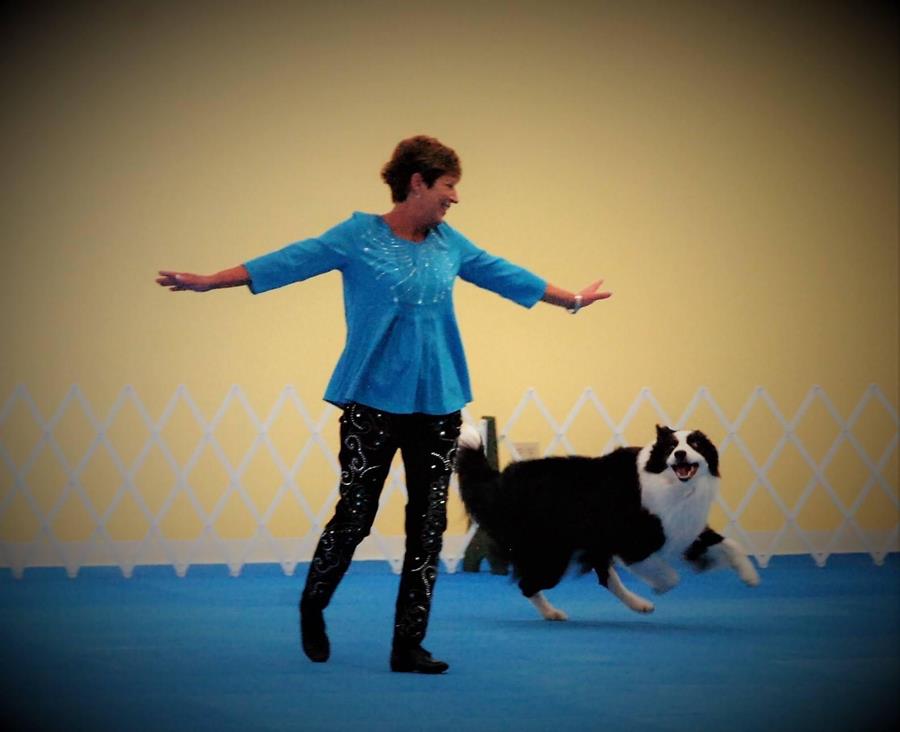 Now, after much consideration, we are thrilled to announce the recipients of the 2021 Special Awards!

Named in honor of Michele Pouliot who is an inspiration to us all with her innovative approach to freestyle and her ability to draw us into the worlds she creates, this award is given to someone who, like Michele, uses patient training, clear communication and positive reinforcement to create beauty and precision in their freestyle routines.

Carrol Haines is the recipient of The Michele Pouliot Storyteller Award

Carrol is an extremely talented freestyler, trainer and choreographer.  She has consistently created routines that wow judges, audiences and fellow freestylers alike. As one nominator says: “She depicts her characters and tells the story flawlessly. Her routines are simply magical.”  Congratulations, Carrol!

The Poetry in Motion Award

Named in honor of Cassandra Hartman who is the perfect storm of polish, poise and precision, this award is given to a freestyler who constantly raises the bar, not only for skill and presentation in freestyle, but for understanding that physical conditioning, respect and both partners having an active role is what creates the most awe-inspiring performances.

When Lynn steps into the ring, the room goes quiet because no one wants to miss a single second of her heartfelt routines. As a poet, Lynn is no stranger to evoking emotions. “She has choreographed uniquely beautiful routines  with four different dogs of three distinct breeds. She has the gift to tailor each routine to the personality of each of her dogs.” Congratulations on a well deserved honor, Lynn!

The Trail Blazer Award is named in honor of Owner and Creator of Rally Freestyle Elements Julie Flanery. It recognizes a person who has contributed to the  growth of freestyle or Rally-FrEe by encouraging participation and mentoring others in their journeys, as well as fostering their skill, continued involvement and enjoyment of
the sport(s).

Many don’t realize how much time, energy and persistence go into getting people involved in and staying involved in freestyle and Rally-FrEe. As is clearly evidenced by her students’ nominations, Candice is on the ground, doing the work, putting on workshops, teaching classes, setting up practice sessions and hosting events! “She can draw out the love of the sport in her students by exemplifying how the use of positive reinforcement can strengthen the bond between handler and pup. I know this because that’s how she made us fall in love with Rally-FrEe,” one wrote. “When I told her we earned our RF title she was so thrilled for us. Her first words were “I never had any doubt,” said another one of many. Congratulations and thank you to Candice Shute, this year’s recipient of the Trailblazer award.

This award honors Diane Balkavich, who was always a staunch advocate for positive reinforcement and relationship-based training. An elite competitor in freestyle, Rally-FrEe and obedience, Diane’s expertise as a trainer earned her many perfect scores. Her dogs were always happy and responsive in the ring. She was one of the best of the best.

The “Heart of Freestyle” is awarded to the freestyler that most portrays Diane’s kindness, compassion, clarity, and courage of conviction in the use of positive reinforcement training and in their relationships to their dogs and their fellow freestylers. The honoree should support and encourage others to maintain positive, compassionate and constructive relationships with their dogs, as well.

If you enjoy RFE’s encouraging Facebook and Instagram posts, you can thank Claudine. As one nominator said, “You see her every day encouraging and supporting the RFE community.” Claudine also consistently puts out amazing performances in both freestyle and Rally-FrEe with her best friend, Augie. Recently earning a 200 in one of their Champion Rally-FrEe runs, and entertaining with their creativity and technical skill in routines such as “Perfect,” “I Feel Pretty,” and “You’ve Got a Friend in Me,” Claudine and Augie show what’s possible with patience, commitment and a genuine love for what you’re doing. Her honesty about the frustrations that nearly ended her freestyle career soon after it started are relatable and inspiring. “Claudine’s success after almost giving up has shown me that we all go through rough patches. Thinking of how far she came gives me hope,” one nomination read.

Claudine recently earned her KPA-CTP certification in her pursuit of becoming a better trainer and partner for Augie, and she is currently working toward her RF certified instructor status so that she can continue to help others train for Rally-FrEe and musical freestyle. Claudine is also in training to give even more of her time to fellow members by becoming an RFE judge. Congratulations, Claudine, on being awarded the Heart of Freestyle Award in Honor of Diane Balkavich.

These awards recognize those members that have done just a bit extra to help, encourage, or support their fellow RFE members and others in the sports of freestyle and Rally-FrEe.

These are the 8 exceptional recipients of the “Take a Bow” Award:

And special appreciation goes out to all the judges and event hosts for their ongoing support of RFE and the sport of Musical Freestyle.

Watch the full Special Awards Presentation to see the beautiful awards and hear more about all of the amazing award recipients!

A warm and grateful thank you to all the winners and nominees! You each make this community better with all that you do.